I’m delighted to welcome Tinney Heath to the blog today. Tinney is the author of A Thing Done, a novel set in 13th century Florence, and a fellow blogger at http://www.historicalfictionresearch.blogspot.com. Today, Tinney takes us to Sicily.

“We might have been in the Nuovo Cinema Paradiso, but instead of flickering images projected in black and white, we watched knights in shining armor stride across the stage, less than 3 feet tall, their colorful plumes bouncing and their shields clanking.  Backstage a tenor sang out ‘Allarme, allarme, allarme,’ gruff voices challenged menacing Saracen warriors, and the puparo’s [puppeteer’s] wooden sandal stomped out a battle rhythm, as one by one the pupi [puppets] crossed swords with the infidel, lopping off heads and splitting torsos, or took a swipe at a passing dragon to rescue a damsel in distress.” 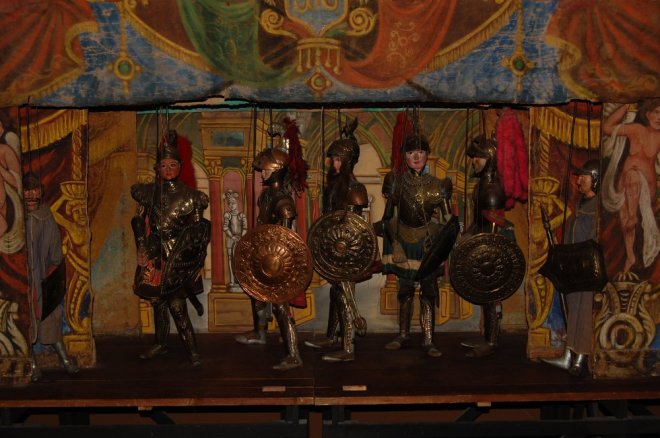 That’s Mary Taylor Simeti, longtime resident of Sicily and the author of On Persephone’s Island and Travels with a Medieval Queen, describing a traditional puppet show in Palermo in 1964.

The show that night was one of 271 installments of the Paladini di Francia, a serialized story loosely based on the 11th century French epic poem “Chanson de Roland.”  It tells of the adventures of Charlemagne and his knights as they battle against Saracens, sorcerers, dragons, devils, monsters, and occasionally each other.  The Charlemagne tales are the mainstay of this art form, though other traditional stories can also be seen, including shows based on Shakespeare, Homer, and the Bible. 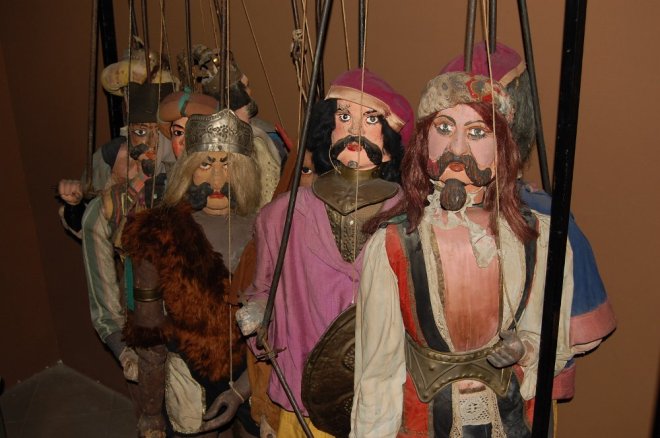 The Franks, ready for action.

The handcarved puppets, of dense chestnut or cypress wood, have expressive painted faces and realistic glass eyes.  Each puppet character has its unique clothing, armor, coat of arms, and a distinctive style of movement, making them easy to identify.

Shows are played against elaborately painted backdrops, and to the accompaniment of music, often from a barrel organ or a player piano.  Dialogue is spoken by the puppeteers and usually improvised; certainly there were moments while watching a show in Palermo that I wished I could understand Sicilian dialect, because judging from the reaction of the locals in the audience, I had managed to miss something very funny. 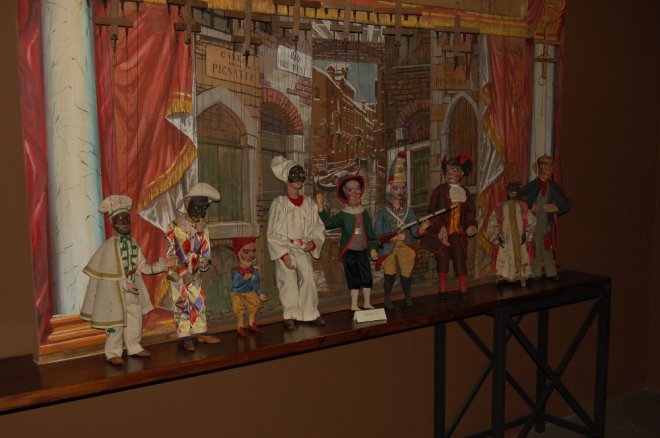 Simeti observes that each show includes two things.  One is a council, to show characters talking together and let the audience get to know each one and the values he or she personifies.  Once we know who the good guys and the bad guys are, it’s on to the second element:  the battle scenes, which occupy most of the show.  Battles are vivid, colorful, and violent, and characters are slain, often spectacularly.  Puppets doomed to this fate are constructed so as to lose limbs or a head in battle, or even to split completely in two.

Depending on which Sicilian tradition they come from, puppets can be around 3 feet high (Palermo) or closer to 5 feet (Catania).  Palermo’s smaller puppets have articulated knee joints, which the Catanian marionettes don’t, and they are capable of sheathing and unsheathing a sword, thanks to an ingenious and intricate system of strings, rods, and wires.  It can take years to learn to manipulate a marionette to its full potential. 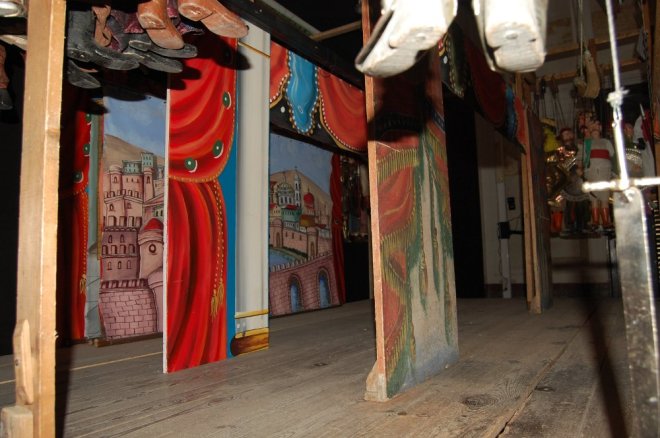 Although Sicily’s tradition of marionette theater took on its present form in the 19th century, Sicilian puppetry actually goes much farther back.  The chivalric legends may have been acted out by puppets as early as the 16th century, and in fact Simeti tells us that Sicilian puppeteers performed in Athens in Socrates’s day.  Sicilian puppets are said to have fascinated Goethe, Anatole France, George Bernard Shaw, and Mario Puzo, and the great Italian semiotician and novelist Umberto Eco was appointed to serve on the board of Palermo’s Museo Internazionale delle Marionette (where all the photos in this post were taken).  This traditional art form has a venerable past, but the question now seems to be, does it have a future?

It’s been pronounced dead before.  First the cinema, then television, were said to herald its demise, and indeed, many theaters have closed over the years.  Families boasting multiple generations of proud puppeteers have had to go into other lines of work.  It is probably the tourist trade that keeps the remaining theaters in business.  But in 2001, UNESCO declared Sicilian puppetry part of the “Oral and Intangible Heritage of Humanity,” and has set in motion training programs for puppeteers, festivals, and awards, in an effort to keep this rich tradition alive. 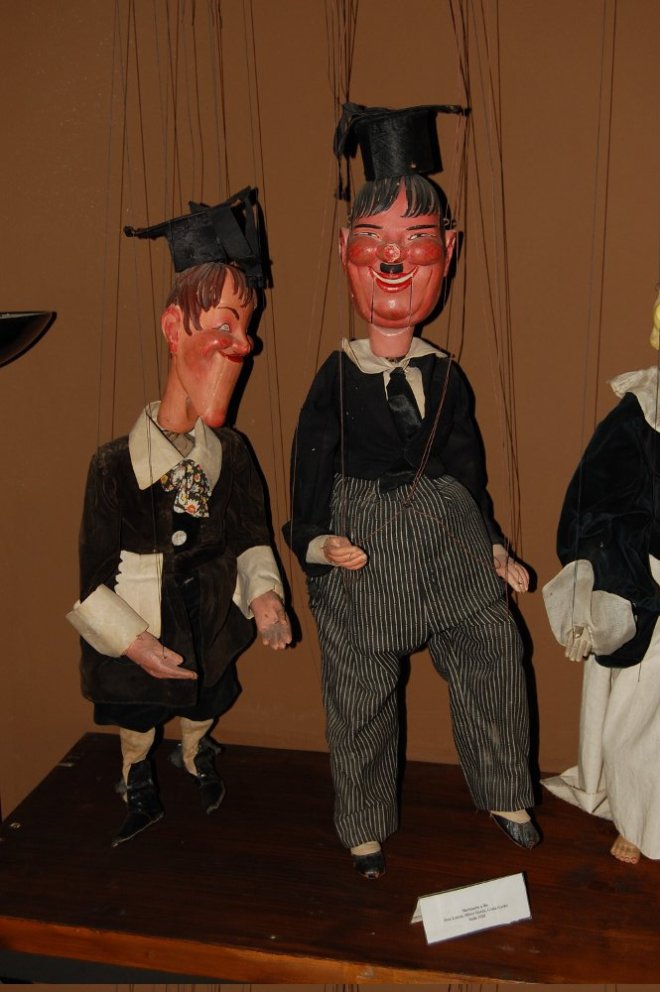 Laurel and Hardy in Palermo.

When my husband and I visited Palermo, our rented apartment was part of the magnificent palazzo that had been the final home of the great Sicilian novelist Giuseppe di Lampedusa, author of Il Gattopardo (The Leopard).  The palazzo is now owned by the author’s adopted son, Gioacchino Tomasi, Duke of Palma and a well-known musicologist and theater director, and Tomasi’s wife, Duchess Nicoletta Polo, a renowned expert on Sicilian cuisine who teaches cooking to tourists and whose recipes appear in cookbooks and cooking magazines.

The Duchess told us that when her husband was in New York as a cultural attachė, they decided to import both puppets and puppeteers and produce an authentic Sicilian puppet show for a small New York audience made up mostly of diplomatic personnel from many different countries.  Children were, of course, especially welcome.  A Chinese diplomat who was unable to stay for the performance dropped off his small daughter, a tiny porcelain doll of a child, and anxiously asked Nicoletta to keep a close eye on the little girl in case she was frightened by the clamor of the swordfights.  The child settled comfortably on the Duchess’s lap at first, but once the action began, within seconds the porcelain doll was bouncing up and down excitedly, screaming, “Kill him!  Kill him!”

We saw another puppet-child interaction in Palermo that charmed us.  After the show, members of the small audience – only seven or eight of us – were standing backstage watching while a puppeteer demonstrated his marionette for us.  A little boy, maybe four or five, was utterly fascinated, and Puppet Orlando was just about his height.  The puppeteer made Orlando draw his sword and wave it about wildly while the child giggled, and then suddenly Orlando dropped his martial posturing, lurched up to the boy, and gave him a big hug, to the delight of everyone.

You can find many videos of Sicilian puppet shows on YouTube.  Some are quite slick and professional, with educational commentary.  To give you a taste, though, I’ve chosen this one, taken from the audience, because it captures the feeling of being at one of these shows, and makes it clear how much the audience is enjoying it.

Tinney Heath’s historical interests can best be described as
Dantecentric: if Dante lived it, wrote about it, or consigned it to the
Inferno, it’s fair game. When not writing about Dante’s Florence, she
spends a lot of time playing medieval and early Renaissance music with
her husband on a variety of early instruments. She loves to travel to
Italy for research (not to mention art, music, and pasta). Her
background is in journalism. To learn more about her work, see her
website: www.tinneyheath.com