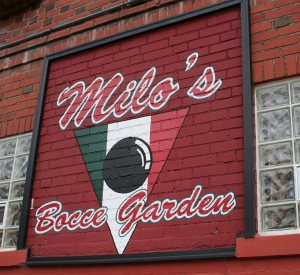 Has bocce ball ever been an Olympic sport? Maybe it should be! It started with the ancient Greeks, and came to southern Italy with them, where it has stuck fast. The French adopted it as boules–and could bocce be the distant ancestor of the bowling alley across town?

The Italian tradition of bocce is kept alive in St. Louis. Milo’s Bocce Garden is a tavern in The Hill, the Little Italy of St. Louis, which bills itself as the “sports center of The Hill” in neon lights. Milo’s installed bocce courts in the 1980s and maintains an active tournament schedule. But bocce was alive and well on the Hill long before that, as the following video reveals. 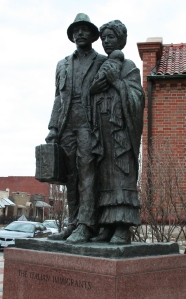 A statue honoring the Italian immigrants who settled in St. Louis.

Four million Italians immigrated to America between 1880 and 1920, creating little pockets of Italian culture, neighborhoods all over the USA known as “Little Italy”. I visited one such neighborhood in January, and here are some photos from “The Hill” in St. Louis.

The Italian colors are popular, from fire hydrants to eye-catching balloons.

You can learn Italian in the neighborhood: 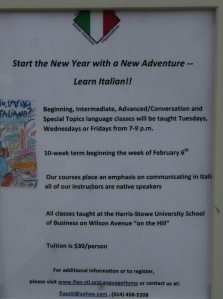 Real estate is sold with an Italian flair, a red-white-green sign:

If you are longing for a blast of Italian culture, food, and style in the midwest, check out The Hill.

My daughter and her husband moved to St. Louis, Missouri in early January, and three weeks later, we visited them, eager to see “The Hill”, St. Louis’ Little Italy. They took us out to dinner at Gian-Tony’s Ristorante, where I had my first taste of Ravioli Tostati.

This deep-fried ravioli is a tradition of St. Louis–but perhaps somewhere in Italy too, the cook accidentally knocked a raviolo into hot oil instead of water, inventing a crispy appetizer. I was told that several chefs on The Hill have claimed that fortunate mistake, sometime in the 1930s or ’40s. The popular dish is available in many parts of the Mid-west now, and some East Coast restaurants too.

So we enjoyed a plate of Ravioli Tostati before our dinner at Gian-Tony’s, dipping the crunchy squares in marinara sauce as we visited. I have to say, the cooks of St. Louis are on to something! Since coming home, I’ve looked for recipes, and am sharing links to a couple of them with you. Here’s a fast-food version from All-Recipes website. Charlie Gitto’s, one of the restaurants that claims the invention, provided this recipe on the Food Network website.