Two years ago today we joined the crowds in my ancestral village of Scigliano, Calabria to watch the procession. Many great memories of our visit!

The western end of Lago Arvo.

Six months ago I hoped to have most of my adventures from last August posted here–but that hasn’t happened. So today I am revisiting one of my favorite days in Calabria. The weekend after Ferragosto we drove up to the Sila, the mountains above Scigliano, to Lake Arvo. As we drove higher, the lowland tree cover gradually gave way to evergreens. We passed through a small town with some kind of dirt bike motocross gathering, and beside the road a stand was set up to sell local mushrooms.

When we reached the lake, the town of Lorica had a street fair in progress.

After refreshments at a local bar, we wandered along the lake and through the stalls selling clothing, souvenirs, toys, and leather goods. What a crowd! Families were out for the holiday weekends, and kids took turns getting pony rides.

We decided to continue to the far end of the lake, and find a place to have some lunch. As the road wound through thick pines, traffic clogged to a crawl, with cars parked Italian style all along the road, wherever they would (almost) fit. It was easy to see the cause of the backup–a roadside grill sent smoke and a mouthwatering aroma into the air. We drove a bit further, and then turned back to try lunch at the grill.

The line at the grill caught our attention.

We each had a grilled sausage on a bun with various toppings–sauteed greens, mushrooms, sauces–and beer was the ideal drink in the summer heat. The few tables were crowded, but we were able to join a couple at a larger table, and visited with them in my feeble Italian. They were enjoying their annual tradition of a summer day trip to the lake. The crowd was definitely Italian–we didn’t recognize any other foreign visitors. Our entertainment was the team manning the grill, with one guy warming the bread on a side grill, while two others grilled sausages as fast as they could, taking them from long ropes of sausage hung up above the smoking stove. 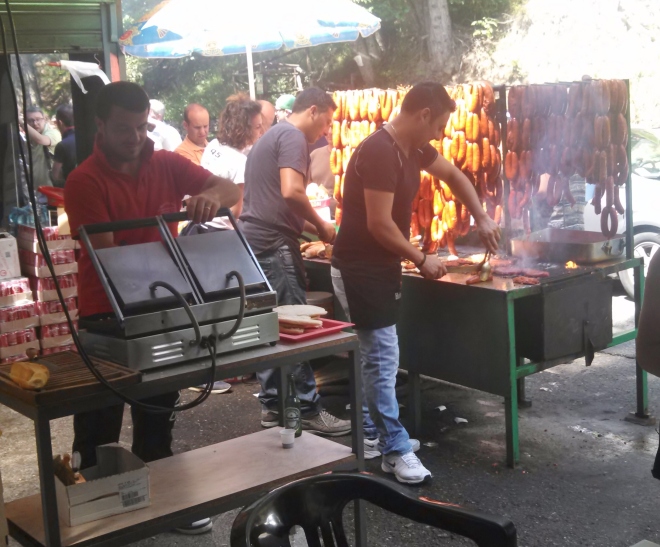 The grill team cranked out a lot of sandwiches!

We returned to our rental in Malito with great memories of our day in the Sila. 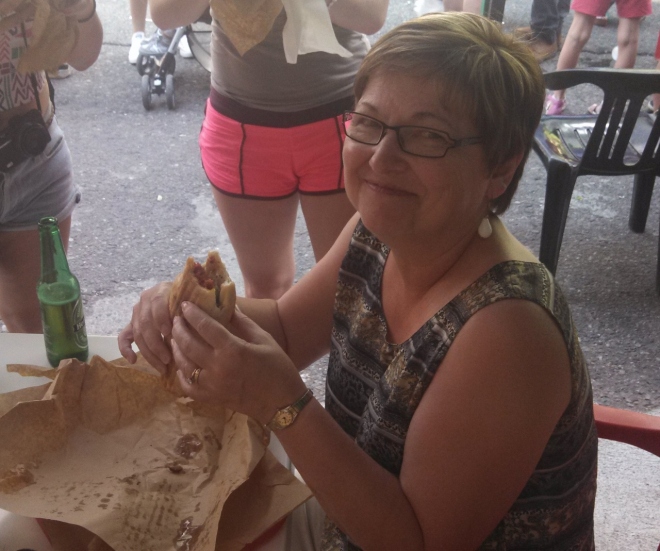 I certainly enjoyed mine!

I can’t say I wasn’t warned. I’ve heard lots of advice about avoiding the August heat and August holiday, Ferragosto, celebrated on August 15, was established by the Roman emperor, Augustus, in 18 BC (according to Wikipedia). The date also marks the Roman Catholic celebration of the Assumption of Mary, widely marked with religious processions in Italy.

The August heat is just too much for me, reason enough to find a cooler month to visit. But why avoid the holiday celebrations? Here are a few visual aids: 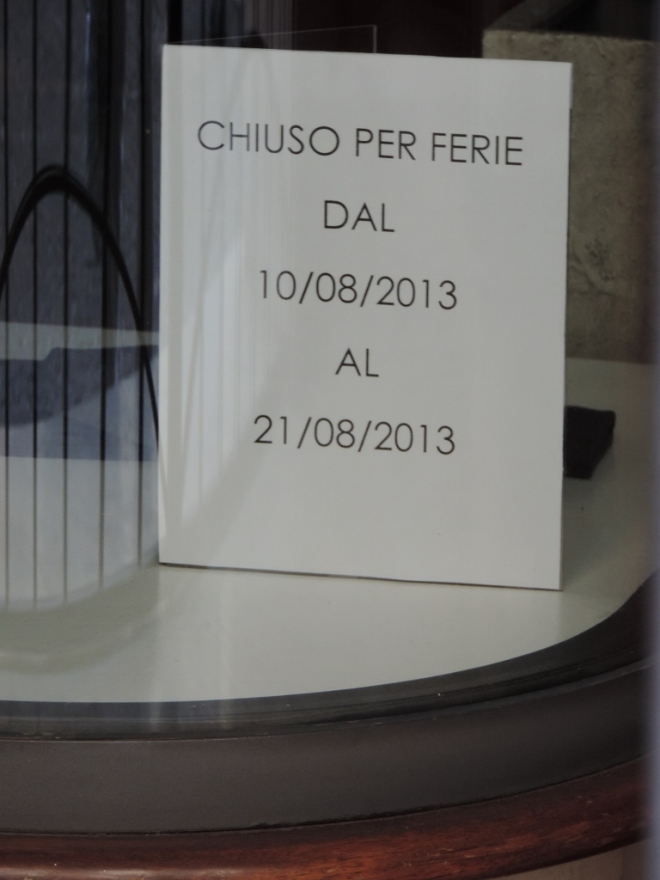 Yes–many businesses are closed for the full week, and often longer, even up to a month. All these signs were along one street in Caserta, where we stopped on our way to Calabria.

In August, families gather, those who have moved away come back to visit in their hometowns. Big family dinners are held, and even those who don’t celebrate the religious holiday take pretty seriously the Latin origin of Ferragosto, a phrase that mean’s “Augustus’ rest”. It’s the Italians’ time to take a break.

So what did five Americans do in Calabria for Ferragosto? We joined a lot of Italians at the beach at Squillace Lido for the day, rented a couple of umbrellas and five chairs for a few hours. By three in the afternoon we were in Soverato having lunch at a seafood place near the beach. They served a special Ferragosto menu, four courses at a set price of 18 Euros per person. Salad of octopus with potatoes, tomatoes, parsley, lots of olive oil. Then mixed seafood lasagna. Then a big swordfish steak (again, heavy on the olive oil). And for dessert, watermelon slices.

By 6PM we were in our ancestral village to see the religious procession with our distant cousin. This was very interesting, and far outside my own Christian tradition. Following a service in the church, the statue of Mary, with a couple of cherubs hanging on, was carried on a circuit through town and back to the church. We visited afterwards with my cousin’s family.

Outside the church, as we waited for the statue to be carried out, my cousin greeted nearly everyone who came by–people she has known most of her life, even though she grew up in Rome and lives in Denmark most of the time now. Scigliano is her home town, and she returns every August, reconnecting with aunts and uncles, cousins and schoolmates, and reconnecting with the church and the meaning it brings to her life.

There are plenty of tourists in Italy in August, non-Italians playing at the beaches, lakes, and in the mountains. But it is clearly an essential Italian family time. As we watched the Virgin carried aloft through the streets, I wondered if my great-grandmother Giusseppina watched the same thing when she was a girl, 125 year ago. I wonder how she felt on the first August she spent in America, far from her village and if she felt keenly the cutting of those family ties–the ties I am trying to rediscover with my cousins in Italy.