In the early 1700s, porcelain produced at Meissen became all the rage in Europe. The King of Naples and Sicily, Charles VII, married Maria Amalia, whose grandfather Augustus II of Poland had founded the Meissen factory, the first hard-paste porcelain factory in Europe.

Pursuing his interest in the art, Charles VII founded the Capodimonte (top of the mountain) Porcelain factory in Naples in 1743. Production was well under way when Charles’ father, the King of Spain, died in 1759 and Charles took the Spanish throne and left the throne of Naples to his son Ferdinand. Before he left, however, he ordered the porcelain works demolished, and took the molds with him to Spain to found another factory there.

Ferdinand IV wasn’t so easily dissuaded–he had come to appreciate the porcelain art himself, and re-established the Capodimonte factory in 1772.  The detailed history (some found here) is more complex and involved a lot of experimentation with the porcelain “recipe”, hiring of various artists, chemists, directors, and so forth, and the establishment in Naples of an art academy.

Elaborate bisque figures, “The Triumph of Bacchus” from the Capodimonte Museum in Naples. Image from Wikimedia Commons.

Ferdinand was soon embroiled in Napoleon’s schemes for Italy, (I’ve posted about that before) and production of the royal sponsored Capodimonte porcelain ceased around 1818. The factory was purchased by Claudio Guillard and Giovanni Tourne, who continued to used the same mark as the royal factory. In 1834 the company was purchased by a Florentine, and about 1896 they combined interests with the Societa Ceramica Richard of Milan. They continue to produce porcelain in the Capodimonte style, and the style is widely copied today. 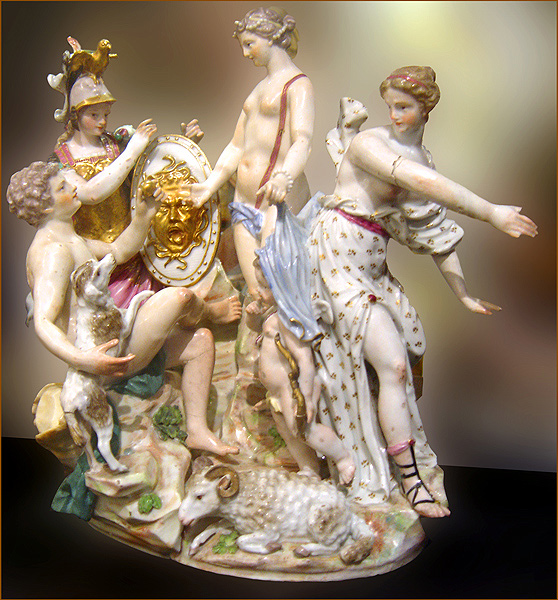 The Judgement of Paris, now in the Capitoline Museum in Rome. Colorful and elaborate figures typically linked with Capodimonte style. Image from Wikimedia Commons.

Most of the 18th century products are in museums or collections of the wealthy today. Are you interested in buying some later pieces? Here are some listing from Ebay.com. Some claim to be 19th century pieces, and others are newer.

QUESTION: What is your favorite art or craft from southern Italy? Please comment!

Napoleon as King of Italy, by Andrea Appiani

Napoleon certainly made his way around Europe, and he didn’t pass up the Kingdom of Naples. The Napoleonic Wars began in 1789. Ferdinand’s wife, Maria Carolina, was a sister of Marie Antoinette, and Ferdinand himself was a first cousin of the French king, Louis the umpteenth. When the French monarchs were executed in 1793, Ferdinand joined the First Coalition, and alliance of European monarchies opposed to Napoleon and revolutionary France.

Despite the efforts of the alliance, by 1798 the French were in control of the northern part of the Italian peninsula, including Venice and parts of the Balkan coast of the Adriatic.

King Ferdinand I of the Two Sicilies, III of Sicily, and IV of Naples–as you wish.

I am not a student of the Napoleonic era, and I’ll probably continue to find the chain of events confusing unless I really devote some time to it. Ferdinand, the King of Naples, is confusing enough on his own. His full Italian name is Ferdinando Antonio Pasquale Giovanni Nepomuceno Serafino Gennaro Benedetto. He is called Ferdinand IV as king of Naples, but Ferdinand III as King of Sicily, which he ruled at the same time. And after the defeat of Napoleon in 1816, he was known as Ferdinand I, King of the Two Sicilies (the island and the mainland, which had been called the Kingdom of Sicily in earlier times).

With the French troops occupying Rome, in late 1798 Ferdinand took an army north to oppose them. He was far outmatched, and his Roman foray is summed up in the saying, “He came, he saw, he fled.”  He went back to Naples, and shortly departed for Sicily (of which he was also king).

Out of the anarchy that followed his departure, on January 23, 1799 the Parthenopaean Republic was proclaimed. Supported by the nobles and the wealthy middle classes, the Republic was strongly opposed by the peasantry, who fought valiantly for their king.

Within a few weeks, the French military was recalled to northern Italy, and Ferdinand immediately began planning to retake his mainland kingdom. An army led by Cardinal Ruffo was formed in Calabria and marched north, reaching Naples on June 13. After eleven days of fighting, a tentative capitulation was being considered, when Admiral Nelson’s fleet arrived in support of the king. By the end of June the Republicans were routed, mostly arrested, and on July 8, King Ferdinand resumed his throne in Naples.

The Parthenopaean Republic’s demise was not the end of Napoleon. But that’s a story for next month’s history post.

THIS LINK will take you to a fantastic interactive map on the Napoleonic Wars.