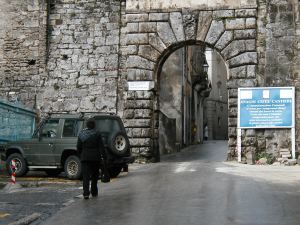 This entry gate to the city of Anagni looks like a great portal for time travel to me. And it’s easy to feel you’ve been transported to the medieval era in Anagni, as so much of that period is preserved.

The city has very ancient origins, and was part of a confederation attacked and defeated by Rome in 306BC. Since that time, Anagni has been an ally of Rome, and a strong supporter of the Roman church. It became an important city during the Middle Ages, and in one 100-year span covering the 13th century, four men from Anagni were elected pope.

On an outer wall of the city’s cathedral hangs a statue of the most famous of those popes, Boniface VIII. You can see it in the upper right corner of this photo. 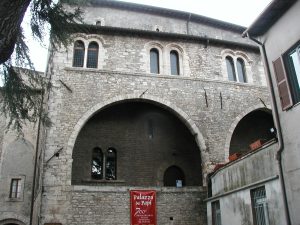 Boniface’s palace is open for tours, and as we walked through it I could imagine the lavish furnishings this wealthy, powerful man might have enjoyed there. Today the contents are quite sparse, but there are remnants of the thirteenth century paint on some of the walls, in a pattern that reminded me of wallpaper.

The city is open for auto traffic, 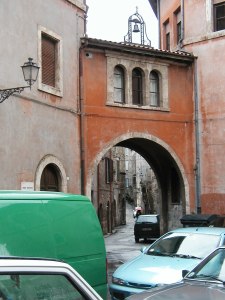 with many one-way streets and tight spaces. I was glad we found a parking spot outside the walls, and walked through the narrow lanes. Walking also allowed us to take in more of the atmosphere, even though the chilly rain dampened us a bit.

The cathedral has beautiful Cosmati tile work on the floor, and the crypt is decorated with Romanesque/Byzantine frescoes in brilliant color and very well preserved.

The modern buildings surrounding it stand in stark contrast to the medieval center of Anagni. I recommend a visit for history lovers, and anyone interested in medieval buildings and design. 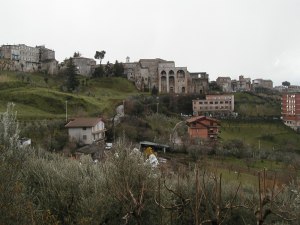